Our Office Compared to “The Office”

Kim here! I was sitting here thinking of what I should write about this week for my blog, and then it hit me. I am going to now compare the staff here at Midwest Family Wellness to the staff on the show The Office, AKA my favorite show of all times. After thinking about this for approximately the last 2.5 minutes, I think there is going to be a person for everyone here. So let’s get in it! 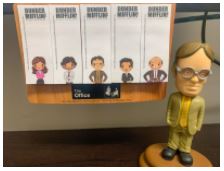 Dr. Josh could be considered the Regional Manager of Midwest Family Wellness as we all turn to him for any executive decisions and usually end up telling him what we are going to do after his crazy drawn out thought comes out. Like Michael, he loves to keep people guessing with his antics and what he is going to do next with what he says and does. It definitely keeps the office interesting. Michael loves to host conference room meetings, which is the same for Dr. Josh. Honestly, he has at least 6 or 7 each week and he couldn’t be happier.

Dwight is Michael's right hand man, even if Michael doesn’t always admit it and that is 100% true for Dr. Josh and Dr. Matt. Two peas in a pod and they act so silly together. Kinda like brothers lol! He always goes above and beyond for the office and I could see Dr. Matt trying to introduce us all to a new currency with his face on it like the dreaded Schrute Buck.

Dr. Brad is definitely our Jim. He is the “hero” of the office as he always makes sure all of his work is perfect and honestly he saves us a lot of time by doing the things he needs to before someone asks him to do so. He is super laid back and absolutely loves playing tricks on his fellow coworkers.

Phyllis is very laid back, but super protective of the people she loves and her family in the office, which I can see Dr. Amanda doing the same for us if it ever came to that. Phyllis is also very good at her job just like Dr. Amanda. She is always teaching the staff here new stuff about what she is certified to do.

Dr. Danielle is our very own Andy Bernard for a few different reasons. First, they both can be a little aggressive at times like when Andy punched the wall. This aggression makes them each a better team member and we wouldn’t have her any other way. Also, everyone loves them, but they also love to give each of them a hard time, which we are all 100% here for.

Kim and Meredith are both people who come in and out of the scene in the office which makes them a little clueless at times at the happenings there, but always do great work. They also both try their hardest to make every gathering a party, whether that is a Christmans party or a Monday meeting, they both think it could be a good time if people try hard enough.

Holly and Michael have a shared sense of humor at times, and so does Andrea and Dr. Josh. You can see them in our office at times both making random noises together and laughing. I mean, when you spend that much time with a person, you have to find common interests right? Holly also is super sweet and caring, almost like the mother of the office staff and Andrea gives off the same kind of feelings to us.

Marisa is our “Front Desk Executive'' and she is just the best. She is super cheerful and literally everyone loves her, but she can also flip the script quick and turn into a crazy spider monkey just like Erin can. Also, Erin has some strange tendencies, like hiding in her hair when she is mad or thinking the rest of the office is plotting her murder, well Marisa unfortunetley has those exact tendencies. Strange and weird in one smiling body with these two. 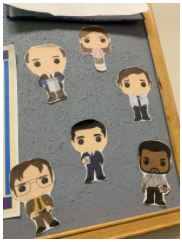 So Stanley hates meetings, so during them he works on his crossword puzzles. Peggy… also hates meeting and during ours she doodles on her piece of paper. Stanley is crazy for the once a year pretzel day and Peggy is head over heels for chocolate. They have both been seen giving someone the judgemental swifty eyes when they are doing/saying something they don’t agree with. So, basically they are exactly the same person!

It's Michelle’s main job to keep our “Micheal Scott'' focused on his work, which can be extremely difficult at times. But she takes it on like a champ. She also takes care of everyone else in the office and makes sure we don't burn the building down with all the stupidity we do throughout the day. Thank you Michelle!

Like Creed, Krisitin is able to come and go as she pleases in the office. Noone ever really knows where she is lol and most days she just pops up. Also like Creed, she tends to march to a beat of her own drum and does things a little differently than most. That is one thing that makes her such a perfect fit for this office.

Madison is a temporary member of the office and could easily be Dr. Josh’s new best friend just like Ryan with Michael. She is quiet and she seems to listen to everyone else's craziness a lot of the time. She might be quiet, but the girl has some style to her as well.

Share on TwitterShare on FacebookShare on PinterestShare on LinkedInShare on Email
← Meet Dr. DanielleSciatic Leg Pain in Dardenne Prairie MO →
Scroll To Top